The Acura NSX has been named Road & Track’s 2017 Performance Car of the Year, besting eight of the world’s finest sports cars by exhibiting a potent mix of performance, style and emotion.

The Acura NSX won this year’s competition largely thanks to its unique driving experience. According to the feature in Road & Track, “For the first time in a hybrid automobile of any price or capability, technology has been placed firmly in the service of emotional involvement rather than in place of it.” The magazine goes on to say, “Everything about the car—from the way in which the brake-by-wire pedal lengthens its travel when the brakes are hot to the manner in which the mid-mounted V-6 permits itself a bit of the ol’ barbaric yawp when it’s winding out in fourth gear—is intended to enhance the driver’s involvement.”

“Every aspect of the new NSX—acceleration, braking and cornering—is a precise, new experience,” said Jon Ikeda, vice president and general manager of Acura. “Having the NSX recognized by Road & Track’s esteemed group of evaluators is not only a great honor for the car, but a testament to the skill, determination and challenging spirit of our team—we are immensely proud.”

Now in its fifth year, Road & Track’s Performance Car of the Year award is chosen based on testing that takes place over the course of four days, two of which are dedicated to the back roads of Kentucky and Tennessee and two of which are spent on track at the National Corvette Museum Motorsports Park in Bowling Green, Kentucky.

To be considered for the competition, cars need to be brand new or significantly revised for 2016. During the four-day testing process, the Road & Track editors and writers evaluate each car based on a combination of emotion, performance and value.

The 2017 NSX launched in the spring, challenging conventional supercar thinking with a three-motor, 573 horsepower, twin-turbocharged Sport Hybrid Super Handling All-Wheel Drive (SH-AWD) powertraini. Produced exclusively at the Performance Manufacturing Center in Marysville, Ohio, the Acura NSX is the only supercar manufactured in Americaii.

Ferrari's New GTC4Lusso Just May be The Ultimate GT 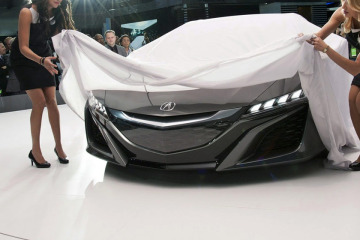