Faster, Porsche presented the 8th generation of the 911 in Petree Hall at the Los Angeles Auto Show. “California is the ideal place to introduce the new 911. California has been like a second home to Porsche for decades,” comments Oliver Blume, CEO of Porsche AG.

“The 8th generation of the 911 is even more powerful, even more emotional, and even more efficient than its predecessor – and also offers extensive digital features. And in spite of all the innovations, the 911 is still just what it has always been: a pure sports car and the pulsing heart of Porsche: our icon.”

Unmistakably committed to the Porsche design DNA, sporting a much more muscular look and an interior featuring a 10.9-inch touchscreen monitor, the new 911 is timeless – and also modern. Intelligent control and chassis elements as well as innovative assistance systems combine the masterfully uncompromising driving dynamics for which the classic rear-engine sports car is famous, with the demands of the digital world.

The next generation of twin-turbocharged flat-six engines has been further developed and is more powerful than ever before, offering 443 hp in the S models. The efficiency of the powertrain has been optimized by an improved injection process as well as a new layout for the turbochargers and charge air cooling system. The engine is mated to a new eight-speed PDK (Porsche Doppelkupplung) dual-clutch transmission. A manual transmission will be available at a later date. The top track speeds are now 191 mph (Carrera S) and 190 mph for the Carrera 4S all-wheel-drive version. Additional highlights include the standard Porsche Wet Mode, an innovative world first designed to make driving on wet roads even safer, optional Night Vision Assist with a thermal imaging camera, as well as comprehensive connectivity that uses swarm data when Porsche Connect Plus is activated.

Detlev von Platen, Member of the Executive Board for Sales and Marketing at Porsche AG, emphasized the importance of the North American market for the sports car manufacturer:

“U.S. customers purchased more than 55,000 Porsches in 2017, and the American importer and distributor Porsche Cars North America is on track to achieve a new record figure in 2018. Ultimately, no model better symbolizes the American love affair with Porsche than the 911. One in three Porsche 911s built in Zuffenhausen goes to the USA.” 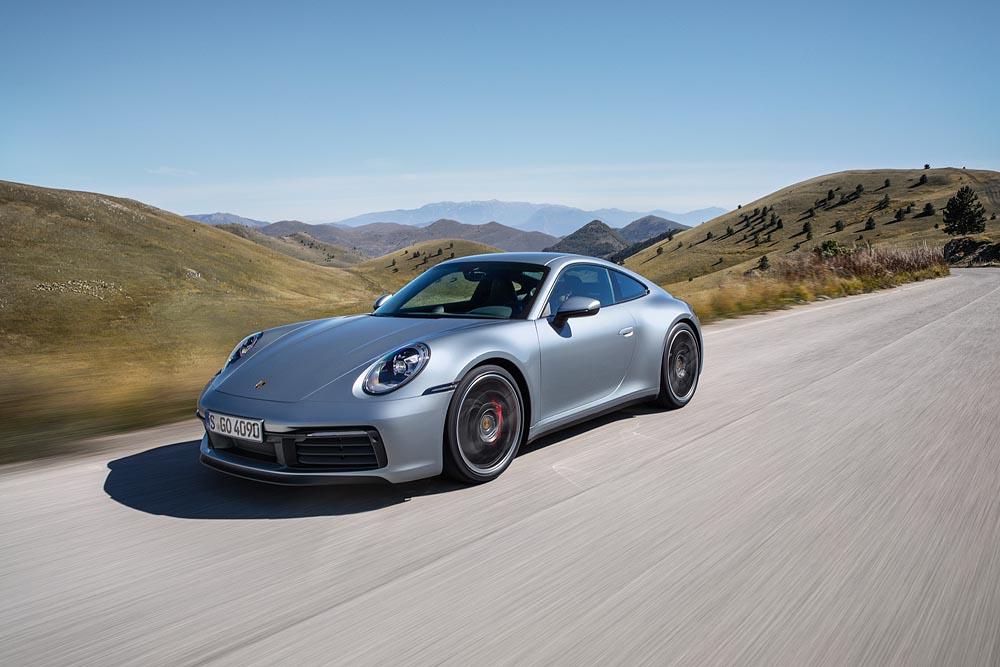 An exterior design that draws on earlier generations of the 911

The exterior design is familiar and yet unmistakably new. The eighth-generation 911 is wider, more assertive, and more advanced. Wider fenders arch over the large 20-inch wheels at the front and 21-inch wheels at the rear. All models now feature the wider body previously reserved for 911 Carrera 4, GTS and GT3 models, which is 1.7 inches (44 mm) wider at the rear fenders. The front end of all models – now 1.8 inches (45 mm) wider – revives a traditional feature of earlier 911 generations: a front luggage compartment lid with a distinctive recess in front of the windshield. Both elements visually lengthen the front of the vehicle and give it a particularly dynamic appearance. At the same time, the newly developed LED headlights illustrate how technology has advanced in the 911. These headlights are integrated into the fenders almost seamlessly, and feature the round and upright shape characteristic of classic 911 models. Flush integration of the door handles that extend when needed emphasize the tapered and smooth side contour. The exterior mirrors have also been redesigned and are optimized to reduce wind noise.

The rear of the new 911 is dominated by the significantly wider, variable-position spoiler and the seamless, elegant light bar. The vertically arranged louvers of the rear decklid grille above the air intake echo the contours of the rear window. As a distinguishing feature, the rear-wheel-drive Carrera S models have black louvers, while the all-wheel-drive Carrera 4S models have silver elements. The centrally located third brake light has also been integrated into the rear decklid grille. Since this is obscured when the rear spoiler is extended, there is a second brake light mounted in the spoiler itself. With the exception of the front and rear fasciae, the entire outer skin of the car is now made of aluminum. 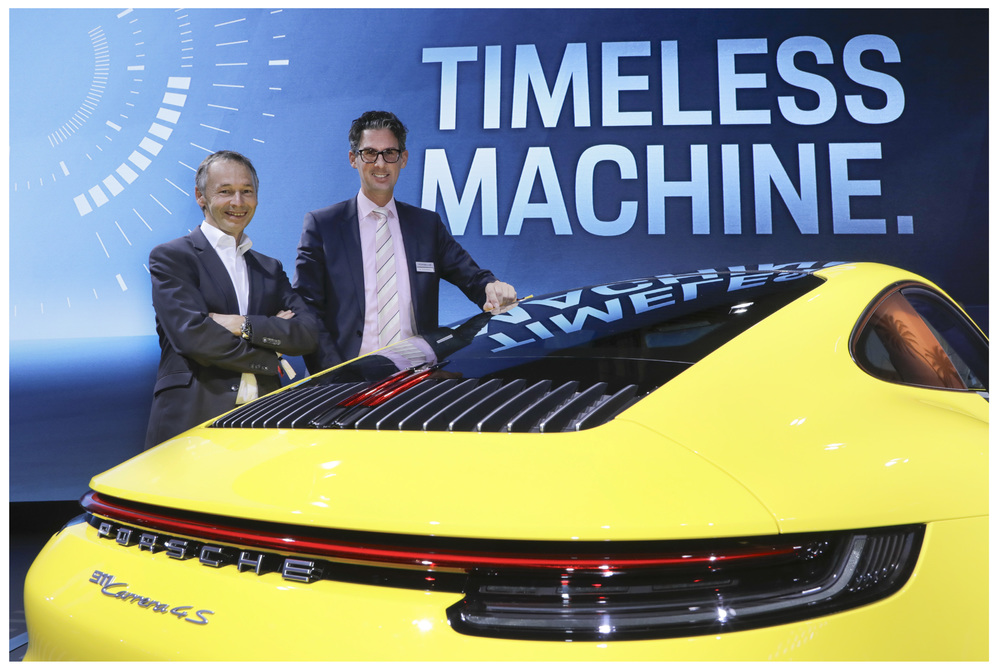 The interior is distinctive, with clear, straight lines and recessed instruments defining the dashboard. The 911 models from the 1970s provided the inspiration here as well. As in the original 911, the new dashboard covers the entire width between two horizontal levels. Alongside the centrally positioned tachometer, two thin, frameless freeform displays provide information to the driver. Below the new Porsche Communication Management (PCM) system, a control panel of five buttons with the look of classic toggle switches creates the transition to the center console controls. The seats have also been fundamentally modified. The adapted geometry offers significantly better lateral support in the shoulder areas. Although the seat is now positioned five millimeters lower than in the previous model and has a minimally thinner seat cushion, seating comfort has been improved overall.

In the area of digitalization, the 911 takes the next step into the future with further improved connectivity, as well as new functions and services. The standard PCM system features Porsche Connect Plus including online traffic information based on swarm data. (A subscription is required after an initial 12 month trial period.) 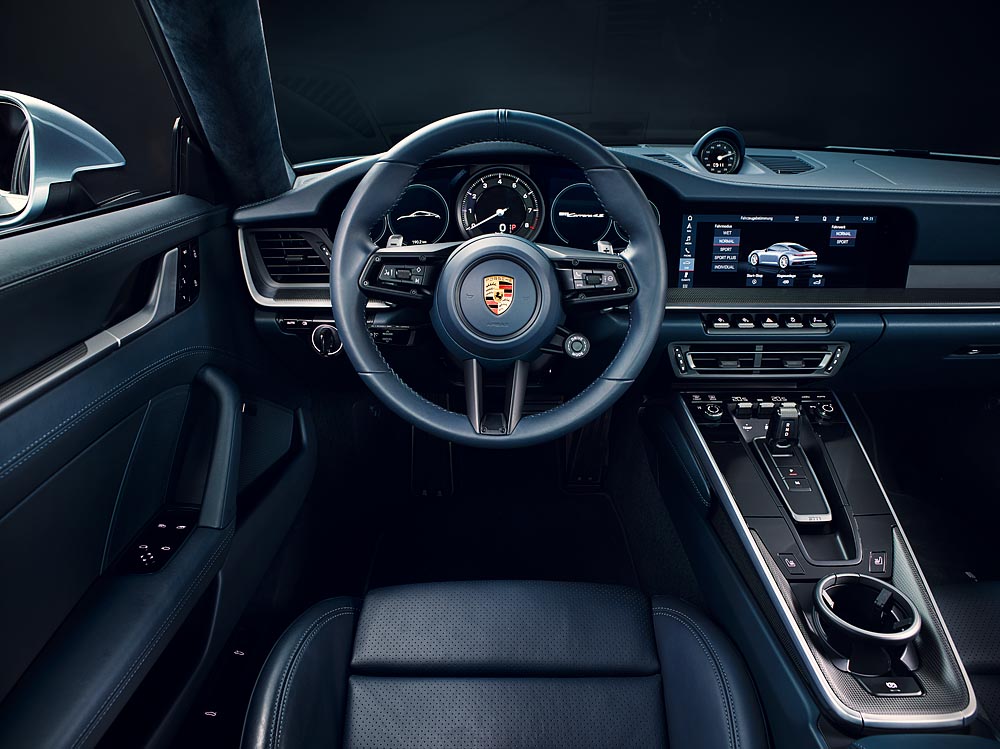 As a world first, Porsche has developed the Wet Mode, which is included as standard equipment on the 2020 Porsche 911. This function detects water on the road, preconditions the stability control and anti-lock brake systems accordingly, and warns the driver. The driver can then call up vehicle settings particularly suited for wet roads at push of a button, or by means of the mode switch on the steering wheel (when fitted with the optional Sport Chrono Package). The camera-based warning and brake assist system, also fitted as standard, detects the risk of collision with other vehicles, pedestrians and cyclists. It initiates emergency braking when necessary. Night Vision Assist with a thermal imaging camera is optionally available for the 911 for the first time. The Adaptive Cruise Control option includes automatic distance control, stop-and-go functionality, and an innovative Emergency Assist function. 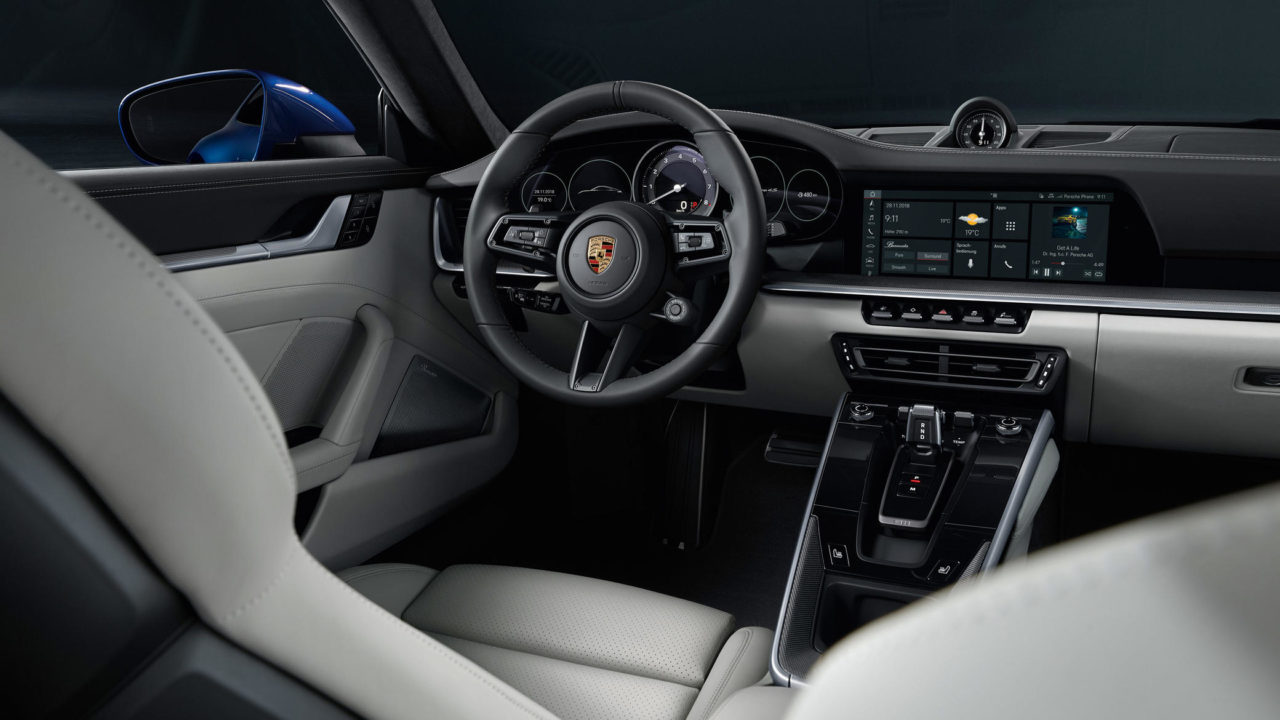 The next generation of flat-six engines

The turbocharged flat-six engines also enter a new generation with the new 911. The primary focus of advanced development here was on further enhancing performance. New, larger turbochargers with a symmetrical layout and electrically controlled wastegate valves, a completely redesigned charge air cooling system, and use for the first time of piezo fuel injectors all improve the engine in key areas: responsiveness, power, torque characteristic, endurance and its free-revving nature. The enhanced engines make 443 horsepower at 6,500 rpm, 23 hp more than the previous model. The maximum torque of 390 lb-ft (22 lb-ft up from the previous model) is available within a wide powerband from 2,300 to 5,000 rpm. 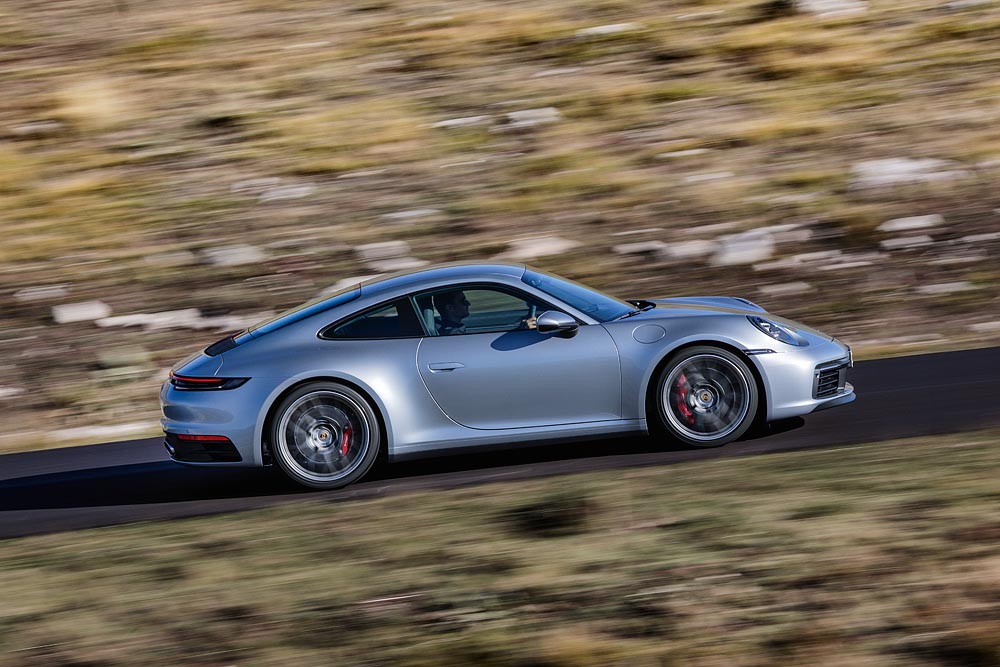 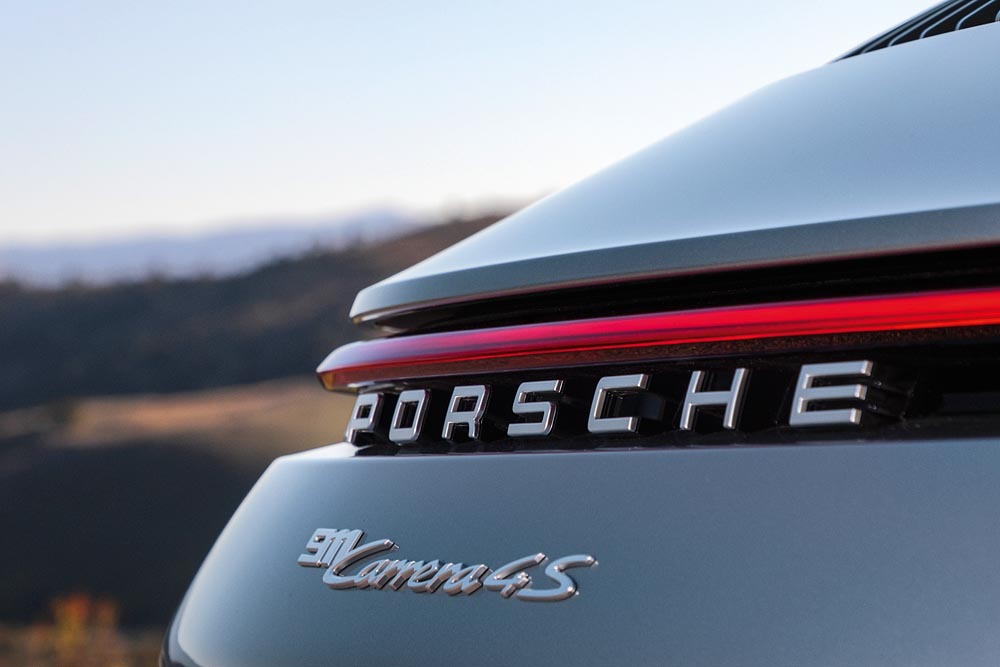 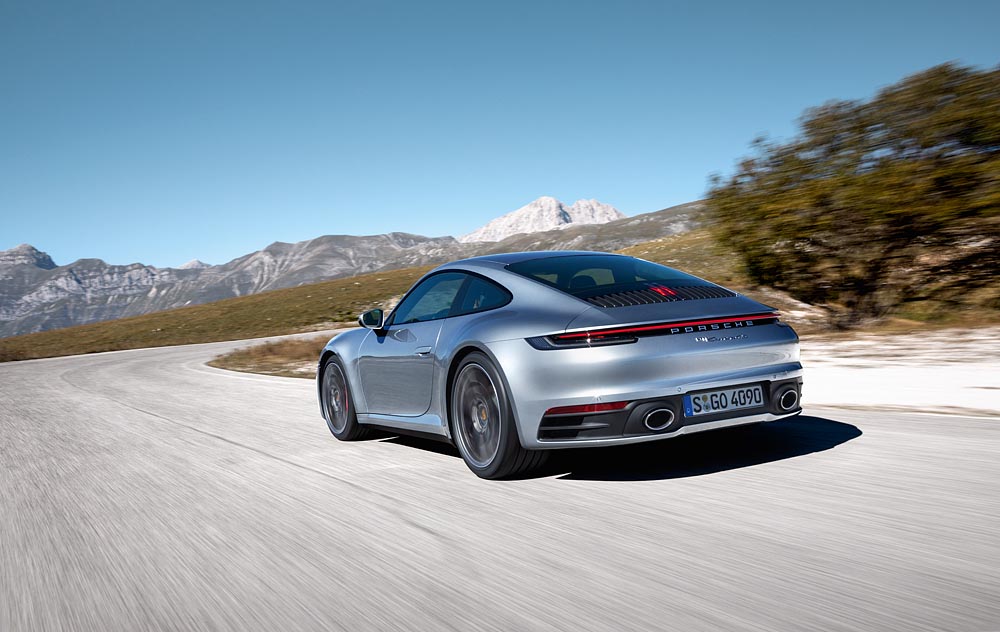 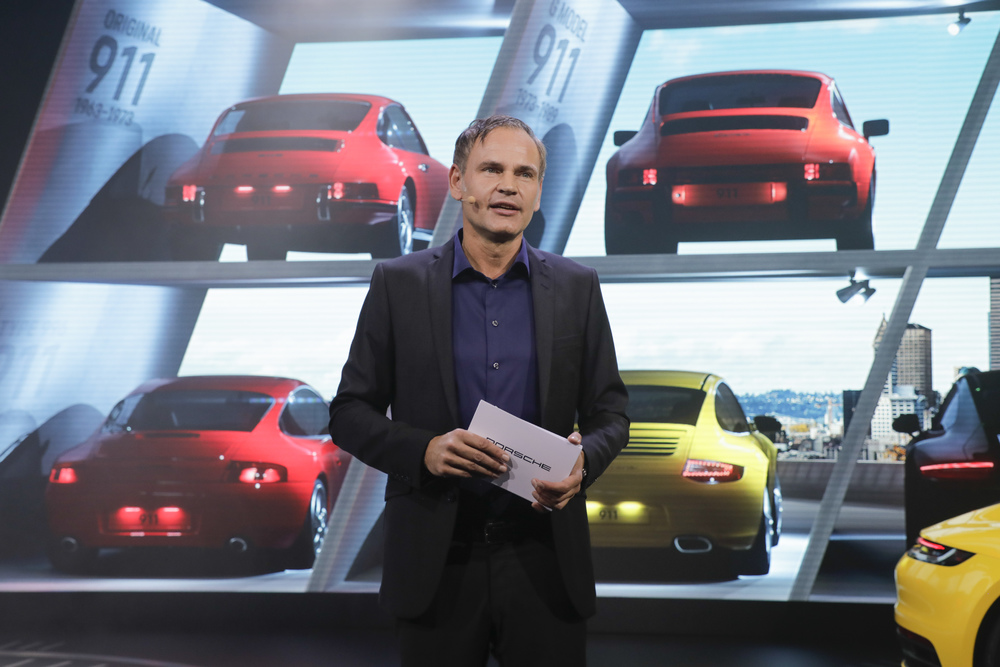 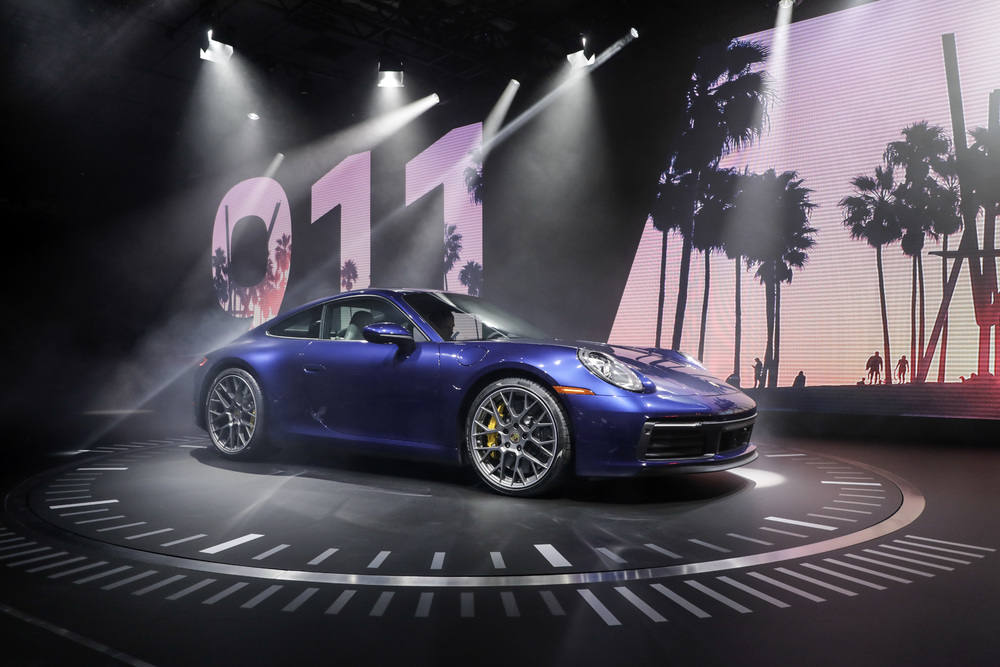 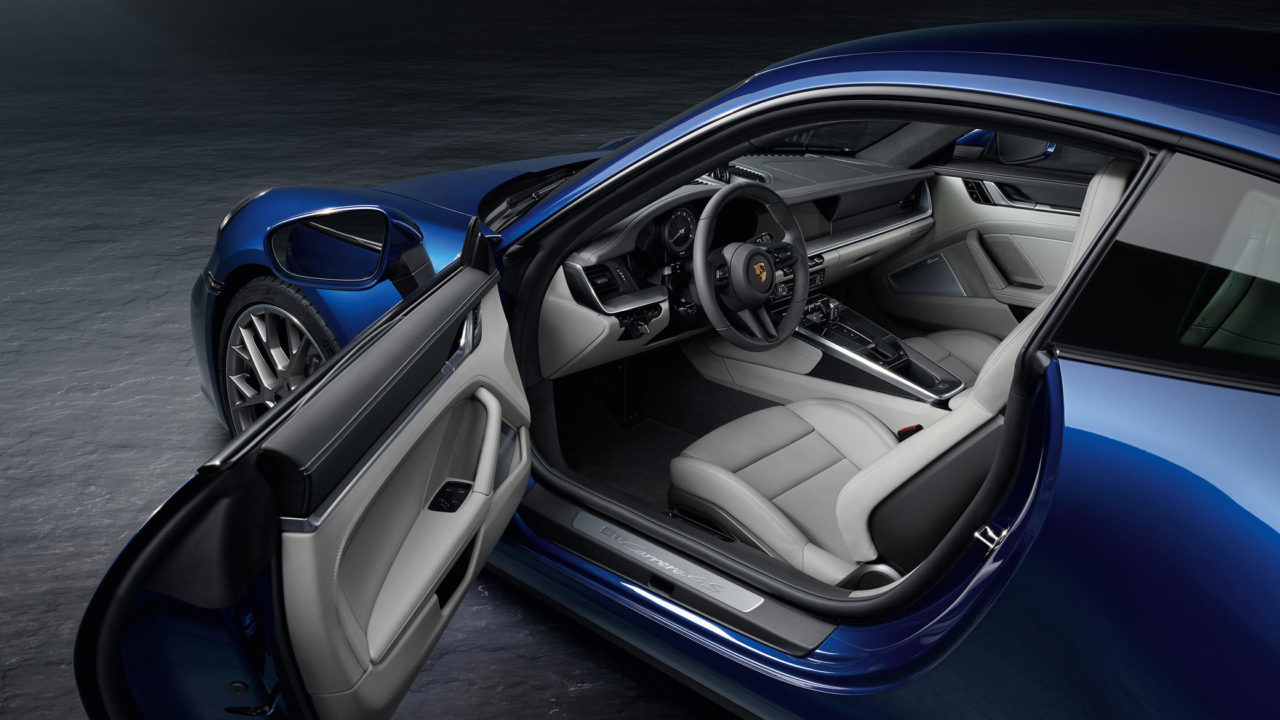 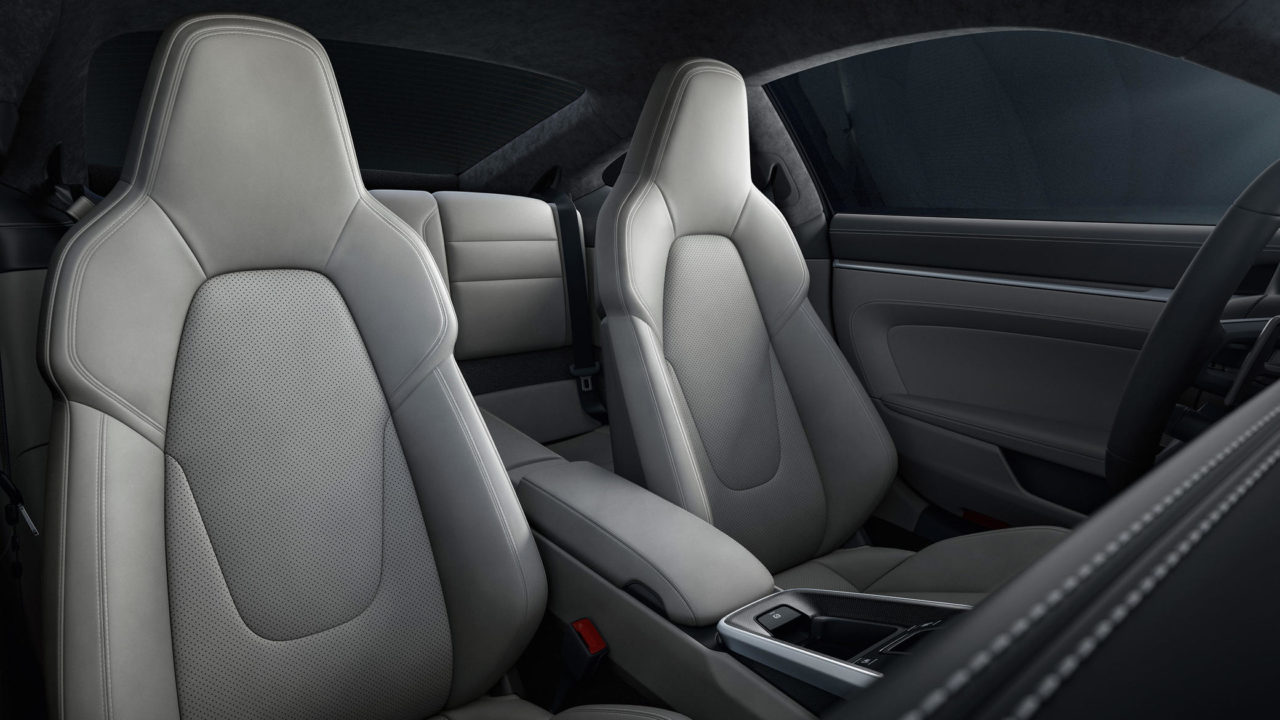 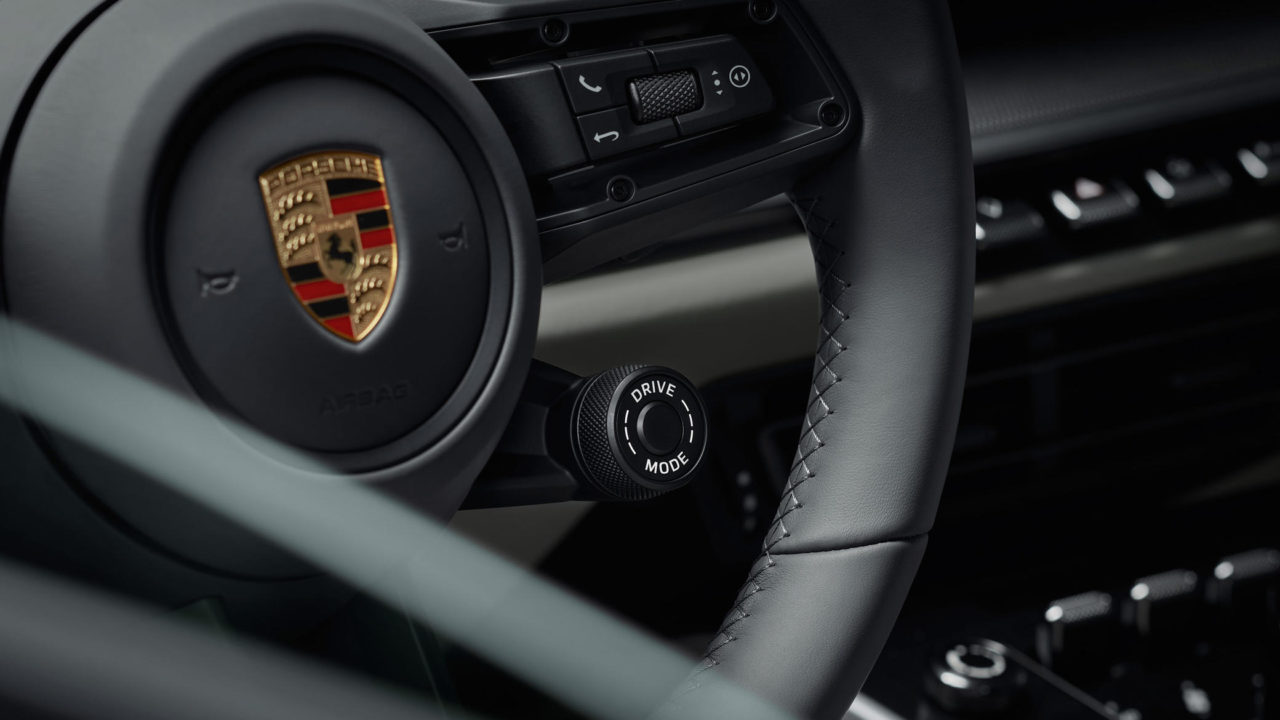 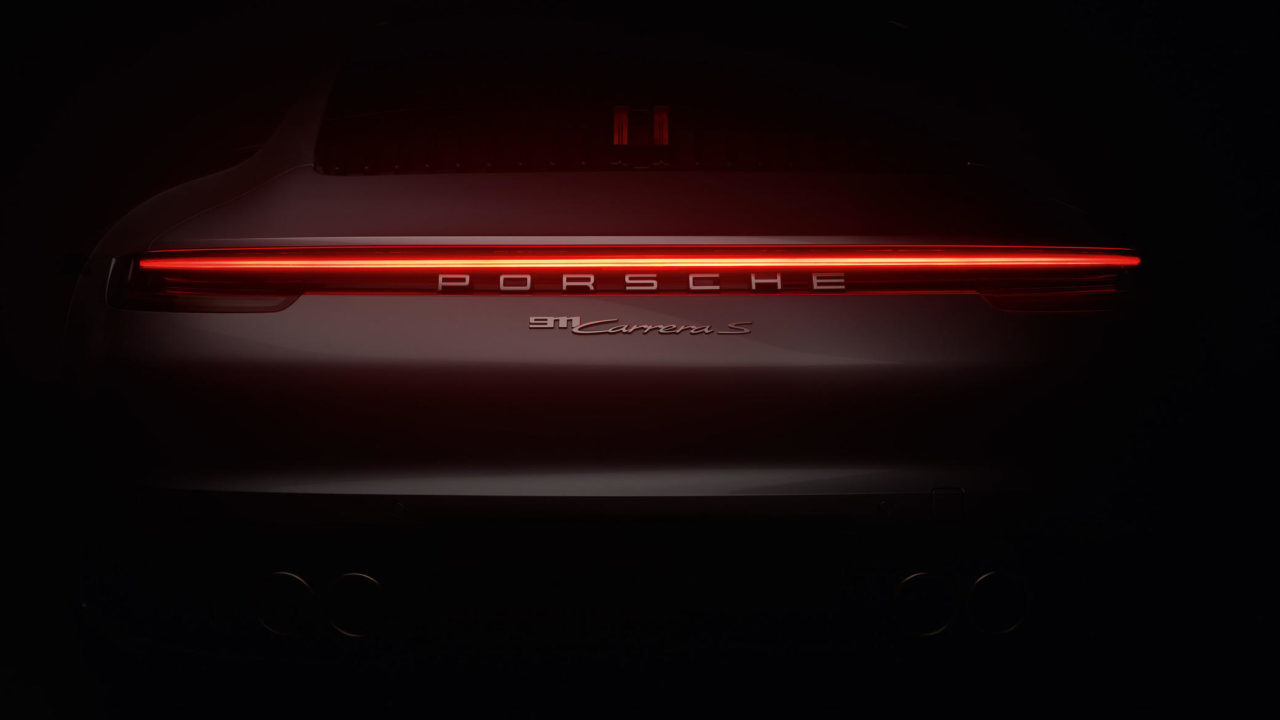 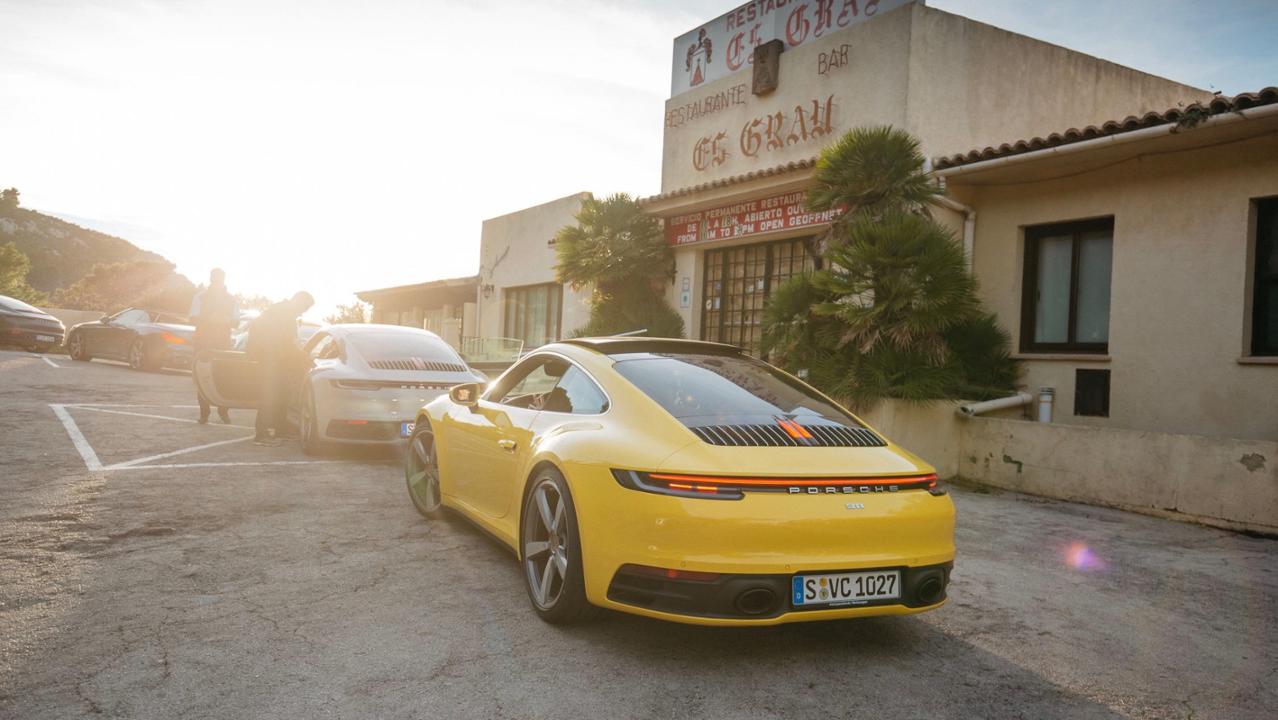 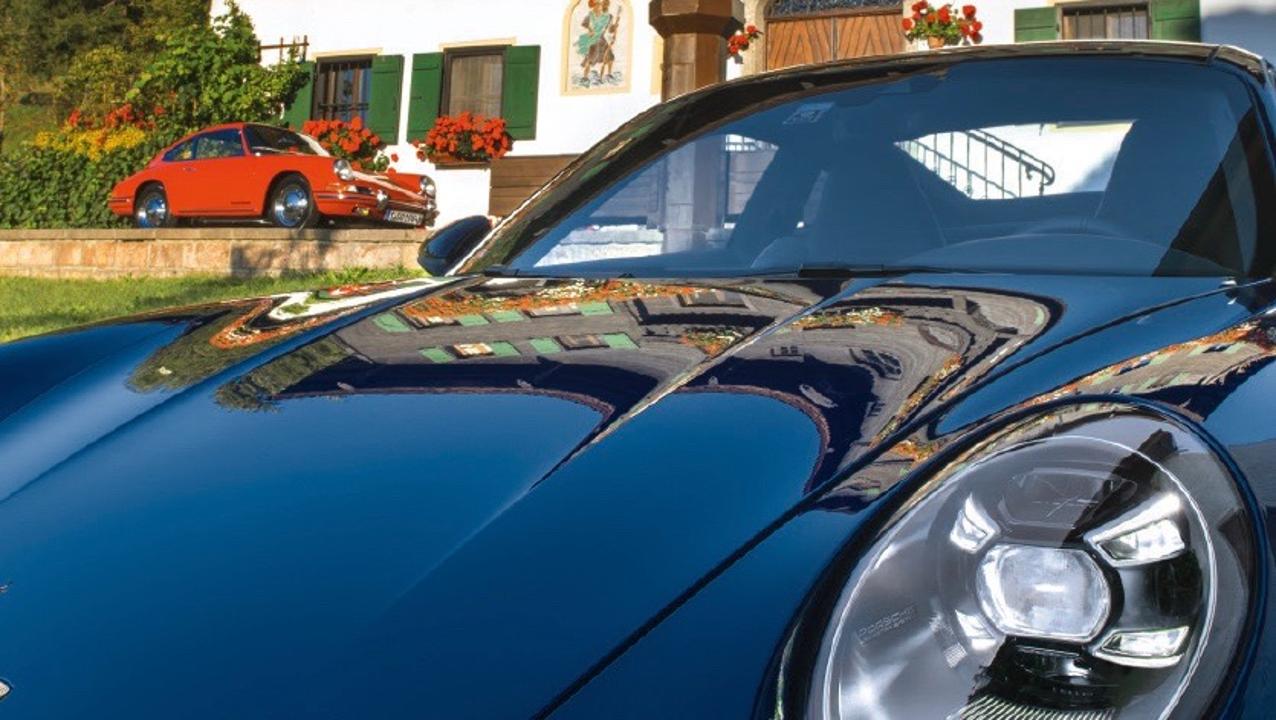 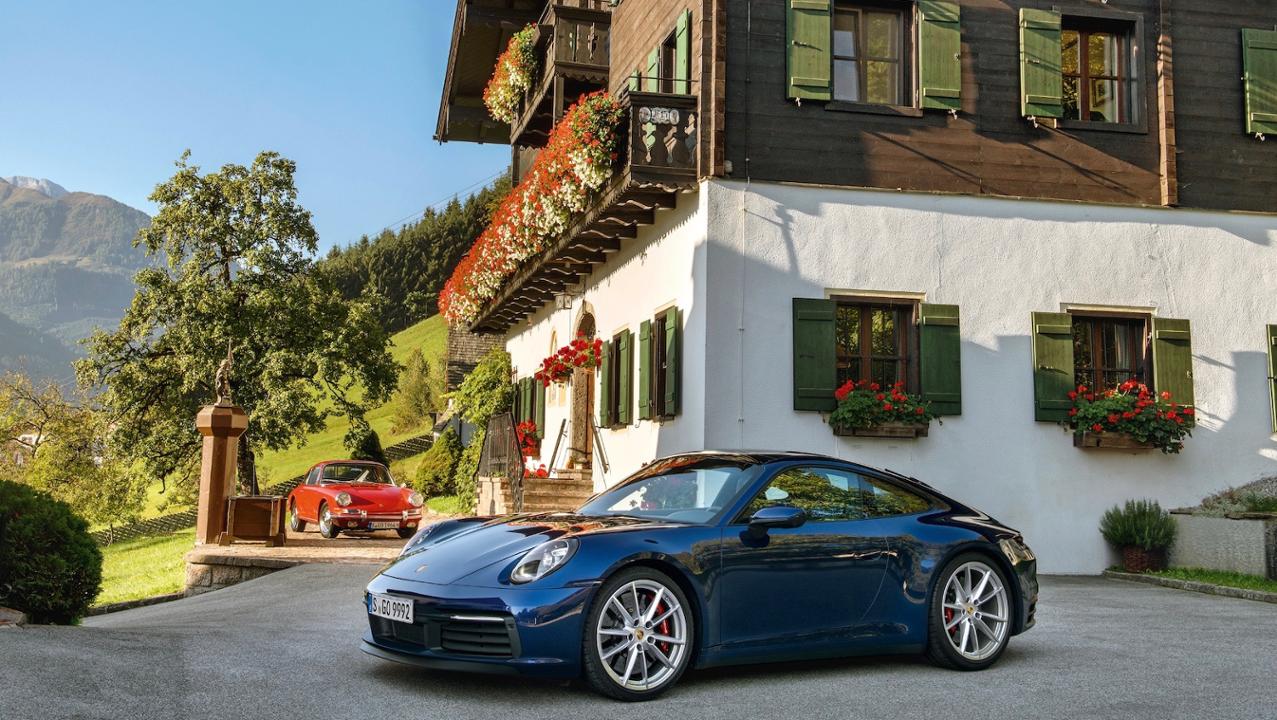 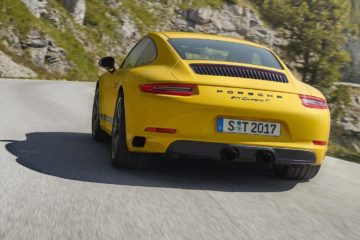