Now that you’ve seen the new Porsche 911 Targa properly, do you agree with us when we say there’s room for two versions of the rear-engined icon that can take their tops off? The 991 Targa is properly glamorous and though the line-up is limited, it still makes a compelling argument for itself. And us Americans are responsible for the genre in the first place.

In a word, glorious. In some more words, we’re of the opinion that there are few finer-looking open-top cars out there. Which may sound a bit contrary, given that for years car reviewers and customers alike demanded convertibles with completely flat-shouldered lines when the hood was down, and that’s something the Targa is patently not capable of. But you’d have to be a pretty cold-hearted soul not to love the retro charm of this new 911.

Taking its inspiration from the 1967’s original shape – styled as it was to sidestep proposed US safety legislation that could have seen fully-open cars banned – the 991 Targa beats its Cabriolet cousin hands down on the aesthetic front. The stainless steel rollover bar wears three gills and the iconic nameplate in homage to its forebear, while the wraparound rear screen is a work of art. As both Targa variants use Porsche Traction Management (PTM) all-wheel drive, they get the wide rear arches and rear light cluster-linking red strip of any ‘4’ badged 911, but it stops just shy of having the broader Porsche-stencilled effort the 964T proudly wore. Shame.

Inside is, well… it’s a 991. So no faults to be found on ergonomics, quality or visual appeal, although keeping it as a 2+2 looks optimistic in the extreme. Not only do you need minuscule legs to fit in the back chairs, which is a characteristic shared with other 911s and therefore not a Targa-specific flaw, but anyone brave enough to venture back there would need to shimmy under the idiosyncratic rollover hoop too. And even should you cram into the limited space available, you’d be jammed into half a greenhouse. Best to just think of it as a two-seater with some luggage space in the rear of the cabin.

Porsche wants the Targa to be as good to drive as any other 911 and as it has half the torsional rigidity of its Carrera chums, it’s probably best to compare it to the Cabriolet. It gives away 40kg to the fully-open 991 – thanks mainly to that lovely rear glass, which means the weight gain is mounted high up. The T4S PDK weighs a considerable 3500 lbs. (est.) all-in – but the rollover hoop fights back for the Targa by introducing stiffness into the body. At 15,000Nm per degree versus the Cabriolet’s figure of just over 13,000Nm, the Targa is 15 per cent more resistant to flex.

And it shows. Given that any convertible is clearly not going to be the keenest of drivers’ preference, set your bar of expectation accordingly and fairly and the Targa will delight you. Yet it’s not flawless. The electromechanical power steering that has irked so many 911 fans on lesser 991s is present, and the Targa 4S’s 245-section rubber on the driven front axle can’t quite eradicate that underlying numbness, especially around dead centre. Beautifully weighted and super-quick, it does improve with speed and more decisive inputs, but why can’t the GT3’s set-up be adopted range-wide?

The throttle is also vexingly soft in its most normal of settings, meaning you have to depress the accelerator far further than you’d expect to in order to get the PDK transmission to drop a couple of gears and push you past the stinking lorry you’re marooned off the rear three-quarters of. This is thrown into stark relief when you press the Sport button, as the throttle mapping in this mode is ideal, sharp without being rabid and making minute adjustments to the Targa’s velocity a doddle. And the 400hp 3.8 is linear, sounds fantastic and obviously bestows mega pace on the Targa, but only delivers its very best work beyond 5,000rpm. Still, as I’m a normal-aspiration zealot, I don’t mind that so much.

Measured by every other parameter, the Targa’s a worthy addition to the 911 canon. The PTM naturally blesses it with nearly unshakable grip in the dry but also the ability to change line mid-bend without threatening your mortality. It will understeer and you take diabolical liberties with something packing six cylinders behind the rear axle at your peril, but the old ‘widow maker’ reputation of 911s has long been urban myth rather than reality. It’s entertaining, though, not just a load of mechanical grip, so extracting pace out of it on a flowing road is a rewarding experience.

Driven in a more appropriate manner for a rag-top, it is massively refined and a pleasure to waft about in. The compliance-to-body-control ratio is about perfect, as the Targa has a firm grasp on its shell but yet it never crashes over bumps or introduces scuttle shake into proceedings. Passenger comfort remains high hood up or down, thanks to a little wind deflector on top of the windscreen header rail that pops up with the roof stowed, and the brakes and PDK gearbox are beyond reproach. So whether you’re cruising or charging, you really should have a big grin on your face behind the Targa’s wheel.

Speaking of options, we’d suggest passing on the lightweight sport shell seats and the Porsche Carbon Ceramic Braking (PCCB) system, since most will not be using this as their track-day weapon, and the standard brakes are fine for the road. We’d recommend opting for the S, because it is a little more charismatic and a little less flat than the standard Targa 4.

The theatrics the Targa displays to fold away what is a tiny bit of fabric roof are suitably grandiose and therefore a pleasure to watch. In 19 seconds, it can raise or lower its hood via an incredible process that sees the entire hoop-and-glass rear deck lift away from the body while there’s a bit of folding to get the soft-top ready for its berth. This lowers away behind the rear seats and then the Targa’s ‘bustle’ drops down again. All of this is powered by the same two motors that fold away the Cabriolet’s bigger-but-lighter apparatus.

Sadly, as should be obvious from its scooped shape, doing this on the move isn’t possible, as the rear screen would become a colossal airbrake and its supports would be damaged in the process, so it’s a parked-up-only job for the Targa. As such, its rear parking sensors monitor the space behind the car when you press the ‘down’ button for the roof, to ensure that there’s nothing within 40cm that could damage the Targa when the rear deck moves backwards.

Some people are not going to like the new Porsche 911 Targa on principle – either because they’re committed drivers who will always favour a tin-top, or because they think it’s a needless show-off in a range that already boasts one perfectly good convertible. And it’s not quite the sharpest of 911s either. But it’s certainly one of the best-looking and coolest, and although the ‘feel-good’ factor that makes it so alluring is intangible, the Targa possesses it in spades. These classics revisited can often be accused of being nothing more than cynical marketing cash-ins but we don’t get that feeling from the Targa. Instead, we simply adore it. Expensive, yes, but then it should be. It’s sublime.

Search for a Porsche 911 near you! 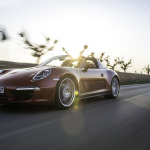 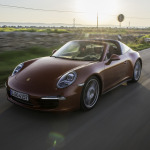 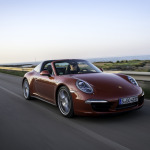 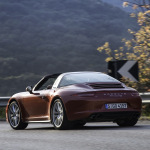 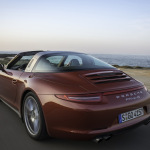 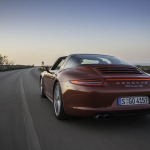 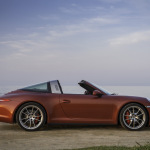 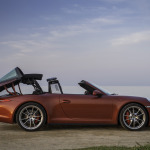 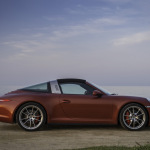 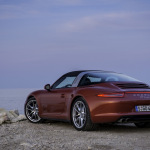 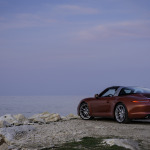 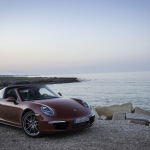 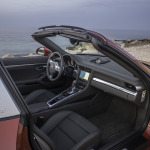 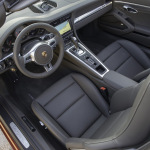 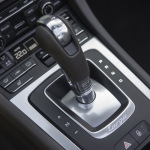 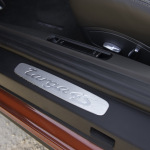 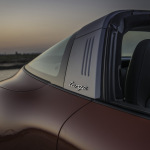 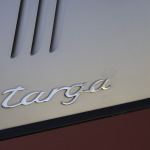 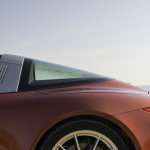 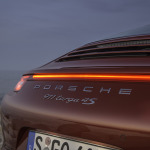 Performance – 9.0
Comfot – 8.5
Value – 8.5
The Porsche 991 Targa is properly glamorous and though the line-up is limited, it still makes a compelling argument for itself.
8.7
Tags:911carreraporschetarga