The new 2017 Porsche Panamera reconciles two contrasting characteristics more than ever before: the performance of a genuine sports car and the comfort of a luxury sedan. It is a grand touring automobile that has been rethought and realigned. The second generation of the Panamera is advancing to become a performance icon in the luxury class. Porsche has systematically improved the Panamera concept – with a four-door sedan that has been redeveloped and reengineered down to the last detail. Its engines and transmissions have been redesigned, its chassis even further advanced, and its display and control concept reinterpreted for the future. The new Panamera also bridges the gap between the world of focused sports cars and the world of luxurious sedans with highlights such as rear axle steering, active roll compensation and a three-chamber air suspension.

911 design language with a more dynamic flyline
Visually, the unique concept of this new Porsche is reflected in an expressive design: always a Panamera, unmistakably a sports car – with long, dynamic proportions, pronounced shoulders, and a roof line that is 20 mm lower at the rear. This typical Porsche flyline creates a stylistic link to Porsche’s design icon, the 911.

Porsche Advanced Cockpit offers superior functionality and intuitive operation
The current Porsche interior has been reinterpreted for the future in the new Panamera. Black panel surfaces and interactive displays incorporate a clear and intuitive user interface similar to that of smartphones and tablets and provide practical and intuitive solutions to control the car. Classic buttons and conventional instruments have been reduced significantly. They have been replaced by touch-sensitive panels and individually configurable displays which take center stage in the new Porsche Advanced Cockpit – with great benefits for the driver as well as the front and rear passengers. Despite a significantly extended range of communication, convenience and assistance systems, different functions can now be used and operated even more clearly and intuitively. The Porsche Advanced Cockpit transforms the analog world into the digital future of mobility, while staying true to the heritage of Porsche. The analog tachometer, with its central position in the instrument cluster, is a tribute to every Porsche sports car of the past. 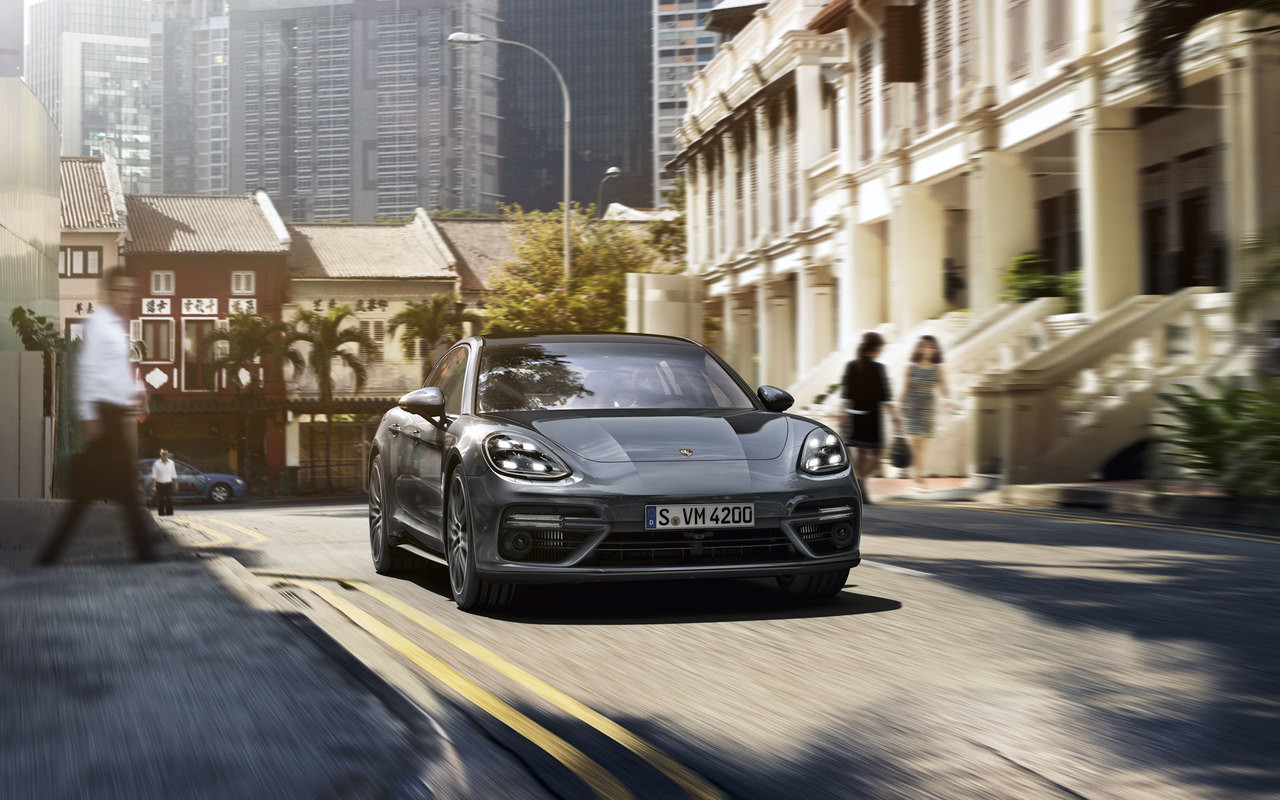 New V6 and V8 twin-turbo engines with ample power and full-fledged sound
A Porsche has always impressed with more than just sheer power; its efficiency is equally important. To elevate this formula to a new level, all second generation Panamera models have redesigned engines. They have all been made more powerful, while significantly improving fuel economy and reducing emissions according to the New European Driving Cycle. Two new twin-turbo gasoline engines with direct fuel injection are being introduced at the market launch in the Panamera Turbo and the Panamera 4S. Both models are equipped with a permanent all-wheel drive system and a new eight-speed Porsche dual-clutch transmission (PDK). The Panamera Turbo is powered by a 550 hp twin-turbo V8, while the Panamera 4S is equipped with a 440 hp twin-turbo V6.

A luxury sedan that is at home on the race track
Reflecting the overall concept of the new Panamera, the chassis also unites the cruising comfort of a luxury sedan with the performance of a true sports car. The impressive standard setup, which includes a new electromechanical power steering system, can be optionally supplemented with innovative systems such as an adaptive air suspension with new three-chamber technology (standard on Panamera Turbo), including Porsche Active Suspension Management (PASM electronic damper control), the enhanced Porsche Dynamic Chassis Control Sport (PDCC Sport) system including Porsche Torque Vectoring Plus (PTV Plus) and active roll stabilization. The integrated 4D Chassis Control system analyzes and synchronizes all chassis systems in real time and optimizes the road performance of the new Panamera. Porsche is also improving the steering precision and handling of the new Panamera with rear axle steering – which has been adapted from the 918 Spyder and 911 Turbo. Braking performance has also been improved.

A new generation of driver assistance systems
The Panamera is equipped with many standard and optional assistance systems, which make life easier and more convenient while driving. One of the new systems is Night Vision Assistant, which uses a thermal imaging camera to detect people and large animals and displays a highlighted warning indicator in the cockpit. The new Night Vision Assistant is one of the assistance systems that helps avoid critical situations in advance. Looking especially far ahead along the road is the new Porsche InnoDrive, which includes adaptive cruise control. Based on navigation data and signals from radar and video sensors, it computes and activates the optimal acceleration and deceleration rates for maximum efficiency, for the next 1.8 miles. In doing so, this electronic advancement automatically takes corners, inclines and speed limits into account. 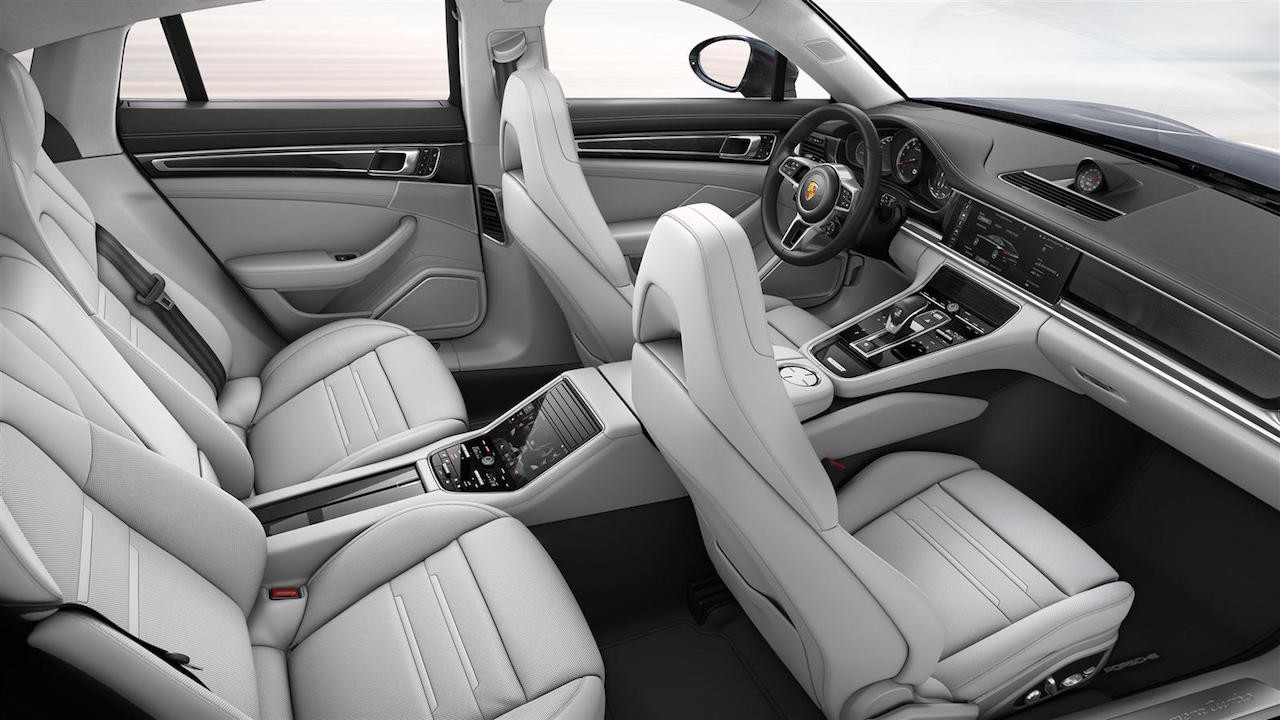 New engines in detail: more power, improved fuel efficiency
The V6 and V8 turbo engines of the Panamera are new, powerful, and fuel-efficient. And they all share a special conceptual design characteristic, with a central turbo layout. This means that the turbochargers of the new Panamera engines are integrated centrally into the V of the cylinder banks. This layout offers numerous benefits: the engines are more compact, and can be mounted lower as a result, which reduces the vehicle’s center of gravity. The short pathways between the two turbochargers and the combustion chambers foster spontaneous throttle response. Engine response can be sharpened further by using the optional Mode Switch with Sport Response Button. The Mode Switch, which was first introduced in the Porsche 918 Spyder, is a rotary dial located within the steering wheel, which can be used to activate one of four driving modes (Normal, Sport, Sport Plus or Individual). Located at the center of the switch is the Sport Response Button. It can be used to generate the maximum amount of power and acceleration potential at the touch of a button.

The Panamera Turbo is now the most powerful model in the range. Its 4.0-liter twin-turbo V8 develops 550 hp at 5,750 rpm and a maximum torque of 567 lb-ft between 1,960 and 4,500 rpm. It has 30 hp more than the previous model, and its maximum torque has been increased by 51 lb-ft. The eight-cylinder engine is capable of propelling the Panamera Turbo from 0 to 60 mph in 3.6 seconds; with the Sport Chrono Package, this time is reduced to just 3.4 seconds. The Panamera Turbo can reach a top track speed of 190 mph, and has a weight of 4398 pounds according to DIN measurement. These are impressive figures that illustrate just how easily the engine can propel the Panamera with its power-to-weight ratio of just 8 lbs/hp.

Porsche uses twin-scroll turbochargers to supply compressed air to the V8’s combustion chambers. The two counter-rotating impellers produce maximum torque at very low engine speeds. The Panamera Turbo is also the first Porsche to be equipped with cylinder deactivation control. Under partial load, the system temporarily and imperceptibly shuts off four of the eight cylinders. This reduces fuel consumption by up to 30 percent compared to the car running on eight cylinders, depending on how much power is needed while the engine is in four-cylinder mode.

The 2.9-liter V6 twin-turbo engine of the Panamera 4S develops a maximum power of 440 hp (20 hp more than the previous model) at 5,650 rpm. Between 1,750 and 5,500 rpm, the new six-cylinder delivers 405 lb-ft (21 lb-ft more) to the wheels. Weighing 4123 pounds according to DIN measurement, The Panamera 4S can reach 60 mph in just 4.2 seconds (4.0 seconds with the Sport Chrono Package), and achieves a top track speed of 180 mph. Like the eight-cylinder engine of the Panamera Turbo, the six-cylinder engine of the Panamera 4S also has direct-injection nozzles that are positioned centrally in the combustion chamber. This injector position offers optimal combustion, maximum efficiency and very good engine response. EPA rated fuel economy numbers will be available at a later date. The 4S and Turbo are also characterized by exceptionally sonorous and authentic sound. 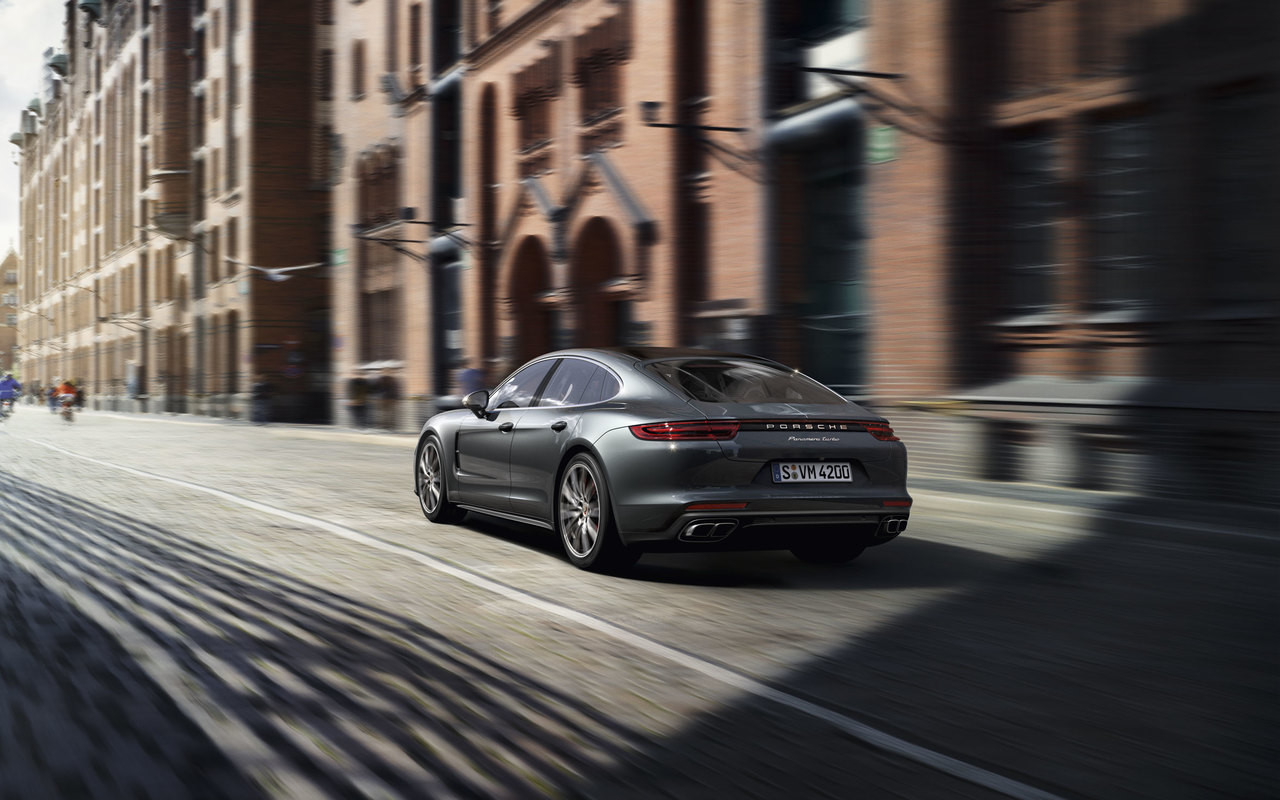 Details of the new design: even more dynamic proportions
The exterior of the second generation Panamera has also been sharpened. It is based on very dynamic proportions. The new Panamera is 198.8 inches / 5,049 mm (+1.3 in / 34 mm) long, 76.3 inches / 1,937 mm (+0.2 in / 6 mm) wide and 56 inches / 1,423 mm (+0.2 in / 5 mm) high. Despite the slight increase in height, the four-door sedan looks much lower and longer. This is primarily due to the reduced height above the rear passenger compartment – 20 mm less than before – while maintaining consistently good headroom. This changes the car’s overall appearance completely. The wheelbase has been increased by 1.2 inches / 30 mm to 116.1 inches / 2,950 mm, stretching the car’s proportions. The front wheels were moved further forward, reducing the front overhang and making the distance between the A-pillar and the front axle even larger. The rear overhang is slightly longer, giving the car a more powerful appearance.

The Panamera has only grown six millimeters in width, but visually it seems like several centimeters. This effect is created by features such as the A-shaped air intake, which extends out to the sides and creates a completely new front-end design. At the same time, a precisely designed crossbar in the central radiator inlet emphasizes the car’s width. The arrow-shaped hood moves this visual effect forward and lower thanks to the prominently contoured powerdome, whose lines now reach into the bumper. The lower front end was enabled by the new compact construction of the engines in the vehicle concept. To the left and right of the powerdome, the hood blends precisely into the stronger flares of the front fenders – a typical Porsche design trait. LED headlights with their four-point LED daytime running lights, available in three versions, give the Panamera an air of confidence. 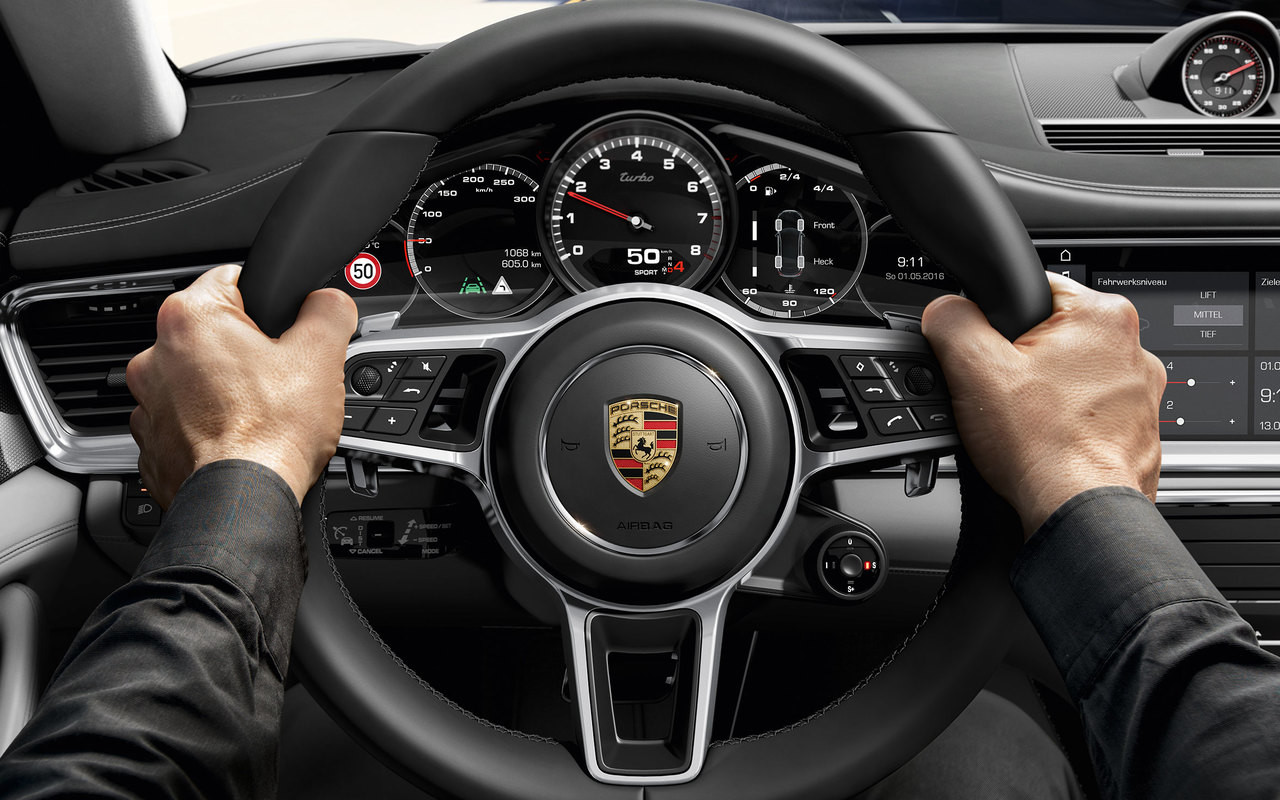 Like the hood, hatch, roof and fenders, the side body is made entirely of aluminum, and resembles the silhouette of a sports car more than ever thanks to its dynamic roof line. At the rear, this roof line becomes the charismatic Porsche flyline – the distinctive lines that adorn all of the brand’s coupés. Two precisely executed edges on the lateral roof line visually lower the silhouette’s center of gravity. The appearance of the side windows has also been restyled: its visually continuous surface, together with its lines on the rear body, creates a stylistic affinity to the Porsche 911. The doors and fenders appear three-dimensional, with incident light shining on their convex and concave surfaces generating muscular tension. Air exhaust ports behind the front wheels serve as the key design components in this area. The flared lips of the wheel arches also emphasize the muscular appearance of the Panamera. They provide space for the 19-inch (4S), 20-inch (Turbo) and optional 21-inch alloy wheels.

The fact that the Panamera is not a conventional sedan is emphasized by the rear more than from any other perspective. The ‘greenhouse’ – made up of the roof, roof pillars, and window surfaces – is supported by a powerful and broad shoulder section. The most prominent components identifying the rear body are, without a doubt, the three-dimensional LED rear lights with integrated four-point brake lights. The rear lights are connected by a narrow LED strip. Together, all of these elements create an unmistakable night design. Integrated seamlessly and elegantly into the hatch, which features electric opening and closing as standard, is the extendible rear spoiler that is now finished in body color. On the Panamera Turbo, the wing also splits as it extends, providing additional surface area. A diffuser with integrated dual stainless steel exhaust pipes left and right rounds out the rear section of the car. The Panamera 4S is characterized by round tailpipes, while the Panamera Turbo features a trapezoidal tailpipe design. 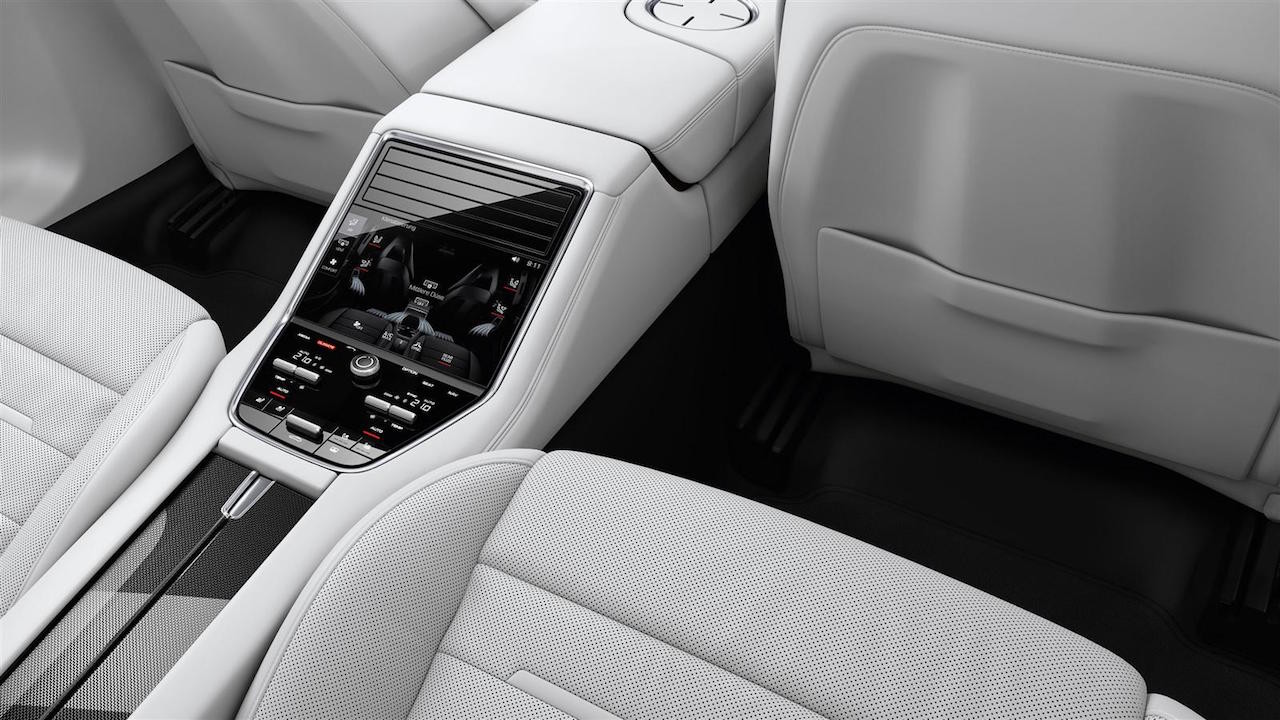 Ferrari's New GTC4Lusso Just May be The Ultimate GT