At the SEMA Show next month in Las Vegas, Ford will be celebrating the 50th anniversary of the Ford Mustang. The Dearborn automaker will be there with a bunch of tuning firms displaying their take on the all-new 2015 Ford Mustang. One of the many tuners will be Galpin Auto Sports (GAS.

GAS will debut a very special 2015 Ford Mustang GT that will be covered in gold touches.

“We like the black and gold idea, and really wanted to get the color as close to 24-carat gold as possible,” said Brandon Boeckmann, GAS operations manager. “The 20-inch wheels, side sills, brake calipers and badging are all finished in gold. Inside, everything that is normally chrome or metallic has either been blacked-out or given the Midas touch. The Recaro seats are covered with a fabric finished in black and gold, and the headliner is black microsuede. The exterior is finished in paint that may appear black, but on further inspection is filled with gold metallic flecks.”

The 2015 GAS Mustang features a slight facelift on the front fascia that is designed to match the three strakes found in the factory Mustang headlamps.

Power for the GAS Mustang has been modified with a Whipple supercharged on the 5.0 liter Coyote V8 allowing for a total output of 726 horsepower. There are also some additional performance upgrades including suspension and exhaust modifications. 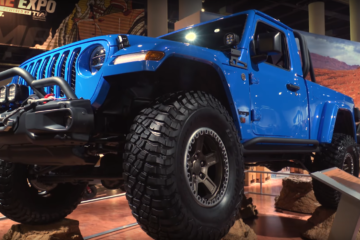